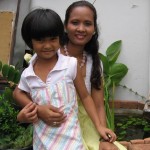 As the oldest child, Thom was expected to support her family—not just her own child, but also her mother, siblings, and grandparents. After repeatedly rejecting her mother’s request for her to work in the bars, Thom was abandoned by her family in the nearby red-light district. Seeing no other choice, she began working in the bars, drinking to numb the fear and pain. Thom’s journey to freedom began when staff from Thai Creations safehouse visited the bar where she worked. As they compassionately spoke into her life, she slowly came to trust them. Thom eventually left the bars and joined their program, finding the freedom she had so desperately longed for. She began learning English and quickly discovered her talent for jewelry and clothing design. Today, she is the program director, training others at the safehouse and regularly reaching out to women still trapped in the red-light districts. Thom is a woman empowered, working to rescue and empower other vulnerable women.

Thom has given WAR, Int'l permission to use her story.