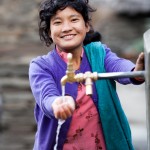 How had she ended up here? Tanvi thought back, allowing her mind to take her wherever it would. As she did, she found herself thinking about her first job. Only a teenager at the time, she had worked at the dance bar. She never wanted to, but her parent’s death left her with only two options: to dance or watch her brother starve. So first it was the dance bar, then prostitution, and now she worked as some stranger’s “personal lady.” Her mind drifted to more pleasant thoughts, finding a balm for its pain in a recent invitation she had received—an invitation to work at the Nepal micro-business! She would no longer have to work with shame; she would be proud of her work. Today, Tanvi spends her mornings going to school and the afternoons working in the micro-bakery and craft program. She loves her new job cooking up treats and crafting beautiful jewelry. But what she loves most is that she can now support herself and her brother in an honorable way.