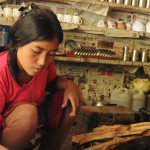 Kumari had never known a family. Orphaned as an infant, she was seven years old when she bought the lies of those who promised love and protection. But then they betrayed and abused her, selling her night after night to strangers. She was repeatedly raped and beaten. She contemplated and attempted suicide. When Kumari came to Higher Ground at sixteen, she hardly believed there was hope or anyone she could trust. But the staff first gave her a home—a safe place from those who owned and controlled her. They taught her how to make jewelry, offering hope of a different lifestyle. Finally, they met with her every week, listening to her stories of suffering and whispering words of worth and value to her. As Higher Ground formed a circle of protection around Kumari, for the first time she found hope, healing, and a true family.