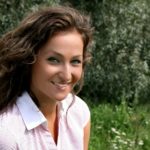 Sold by her father as collateral for a TV, seven-year-old Elena thought she was going to be a housemaid. Instead, her innocence was shattered by abusive men. She returned home a few years later and began to thrive in school, only to be sold once again. Feisty and intelligent, she managed to survive on her own as a young woman—until an overseas job offer fed her back into the dark world of trafficking. She was held captive for nearly a year before escaping, eventually winding up at Cyprus Safe Haven. In this nurturing environment, Elena has begun to rebuild her life. After quickly learning the basics of sewing and jewelry making, she began teaching other girls and soon found herself in charge of quality control. She takes joy in this responsibility, knowing that sales help sustain the program and bring more girls to safety. She hopes to someday use her skills and knowledge to design clothes, perhaps running her own business. Freed from the dark shadows of her past, Elena looks forward to a future of hope and opportunity.