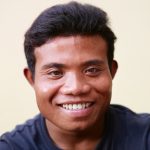 Dipak can’t read and he doesn’t want to. Too many times, those who read and write have cheated and tricked him. For Dipak, education is a sign of “High Cast,” a people group that actively excludes and despises him. At a young age, his “untouchable” status forced him to move away from everything he knew in order to find work. Far from home, he spent hours driving a rickshaw across town, but the money wasn’t enough. His family’s mounting medical bills sunk them further into poverty. On a visit to the hospital, Dipak was approached by a Woven Works manager and soon a number of people rallied around him. They were determined to see his family find a future of hope and healing. Today, Dipak is a valued member of the Woven Works community. He works hard in the café while offering joy, inspiration, and loving advice to those around him. The scars of the caste system have long since been left behind as empowerment and dignity have taken their place.