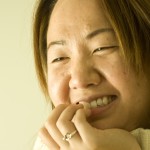 Aisyah was trapped. If the police knew her social visit pass had expired, she would go to jail. She couldn’t get a job and she couldn’t go home. Looking into the expectant eyes of her three young children, she knew she would do anything to keep them from going hungry—even if it meant having to sell herself. While working on the streets, she met our partners, who treated her with respect, spoke with her as an equal, and even invited her to join their day program. To her own surprise, Aisyah found that she enjoyed it. Although she didn’t feel ready to leave the streets, the women from Rescued Roses kept planting seeds, hoping one day they would take root. But when Aisyah’s expired pass was discovered by government officials, they sent her to jail. Our partners visited her, expecting to find a woman defeated and depressed. Instead, they found a woman thriving despite her circumstances. Aisyah had been sharing her story and showing the women around her the same respect and dignity shown to her. In that dark jail cell, Aisyah was a bright light, learning and growing and even planting seeds of her own.