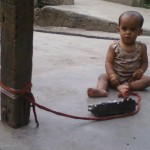 Sweetie was born in the brothel of an Indian slum. Left to cry in a dirty cardboard cradle, she was never held or soothed. Instead, her owners beat her black and blue, slowly forcing her to learn a life of pain. When Sweetie began to crawl, her cardboard box was replaced by a scarlet cord tied around her ankle. Tethered to a pole, she spent her toddler years playing near a gutter full of needles, condoms, and rats. WAR, Int’l has worked relentlessly in pursuit of Sweetie’s freedom. After years of denials and delays by her “owner,” a government official, she was finally removed from the brothel at the age of five. Now seven, this beautiful little girl is thriving in an Indian foster home, but her continued freedom and safety are not guaranteed. Many dangers abound, and until doors open for her to be legally adopted, her future is far from certain.