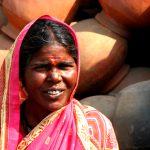 Rama felt invisible. As a woman in a small Indian town, she was hardly valued, with little opportunity to work or go to school. Rama married young, hoping her husband could provide a secure life. But he was unpredictable and spent most of their money on alcohol. When their two children were very small Rama’s husband died, and his family abandoned her. Alone, she wondered if anyone would see the plight of a desperate widow and her children. A life on the streets seemed like their only future. But our partners at Seema saw potential in Rama and invited her to join their creative team. She learned to weave colorful designs on a loom, earning a steady salary for her family. Her fellow weavers soon became her close friends, and in this new community Rama found a sense of love and belonging. No longer invisible, Rama now stands out as a star worker. People all over the world can treasure her purses and her powerful story. Because of her work at Seema, Rama knows that she is valued, and that she and her children have hope for a better future.