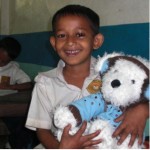 He could not go to school. Even if Peter’s parents had bribed the teacher to let him sit in the back of the classroom, the teacher would have refused. He could not play with the other kids. They ignored Peter and purposefully excluded him from their play. A child with a flaw is not allowed, and Peter had a “flaw.” One of his eyes was crossed, lazy, and in need of two simple operations that his father could not afford. Through the scholarship fund, WAR, Int’l was able to provide the money needed for Peter’s eye surgeries. Our influence admitted him into the best school in town, where he scored in the top 90% of his class! Peter not only goes to school now but also joins in with the children’s play and experiences a life of dignity. There are a lot of reasons for Peter to smile, which is something he does all the time!