Weeknights, as many families are eating, playing games or watching Prime Time, women around the U.S. prepare to care for women in the sex industry. These volunteers are moms, wives, and daughters who are passionate about empowering other women. Outreach teams bring everything from hot meals or baked goods to high-quality beauty products to those working in strip clubs and massage parlors across the country. 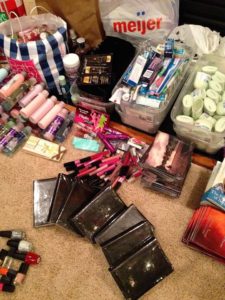 What the women bring is more powerful than lip gloss. They are bringing the love of Christ and the message of the Gospel. Their unconditional love is displayed through their consistency and allows them to learn the names of the dancers, pray for them, and connect them with resources they may need (should they decide to leave the industry). Condemnation is not even in their vocabulary. They go in knowing we are all sinners. But, most of all, we are all created by the Most High God and can be princesses in His Kingdom.

Almost 90 percent of women in the sex industry have experienced some form of sexual abuse as children. Many of the women in strip clubs were lured into the sex industry as minors; some women find themselves under the control of a pimp (a trafficker by definition). These traffickers can be violent in their approach to the women and often force them to prostitute, on top of working in the local strip club.

In a recent study of 130 prostitutes by the Foundation for Research on Sexually Transmitted Diseases, 82 percent reported they had been physically assaulted, 83 percent had been threatened with a weapon, and 68 percent had been raped while working. These are the women society has forgotten, which is exactly why the work of these outreach teams is so critical.

The issue of human trafficking has come to light, proving itself to be an epidemic. It is no longer seen as a dark corner crime. With brave abolitionists beginning to take a stand against this injustice have come many different ways to get involved with the fight against sex trafficking. Direct outreach into strip clubs and massage parlors operating as brothels is just one of the ways we can make a difference. If direct outreach is something you’d like to get involved with, we urge you to do a little research on groups who may already be doing this sort of thing in your area. Prayer is of utmost importance, and it’s something we can all do to practically care for those in the sex industry.

Every day we see the sides of highways flooded with billboards advertising the local strip club. In fact, in large cities, some cabs and taxis have ads for strip clubs or escort agencies on the roofs of the cars. Every time you pass a billboard, some kind of advertisement, or a physical venue, we urge you to pray. Prayer is not insignificant – it’s a force powerful enough to change the hearts of pimps and traffickers.

We will be praying for you as you discern which way God is calling you to serve. Above all, it is our hope you would begin to look at these billboards and venues differently – that they aren’t simply provocative signs or buildings on the side of the road. They represent places where girls are being bought and sold in our cities –every single night. These women are real people with real passions and desires. Some of them have never heard the true Gospel of Christ. We hope you’ll consider being His hands and feet – becoming Christ with skin on – to those in the sex industry in some way.