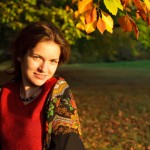 Migena’s husband and brother were murdered for their money—a total of ten dollars discovered between them. Late that afternoon, a van pulled up to Migena’s house, and she identified the bodies. Years later, Migena still cannot describe the pain she felt that day. But with two small children and an ailing mother in law, she had no time to mourn the loss. She searched desperately for work but could find nothing. She began knitting and selling what she could to simply feed her family. Though Migena is proud that her children are now healthy and strong, her own health has suffered from those years of hard work. At the center for Widows of Bathore, she makes and sells handwork to purchase medical treatment for her and her mother in law. According to Migena, when she began, she was simply thankful for the income. But here she soon discovered a new community and a new faith that inspires and sustains her. Now, though Migena’s children are grown and gone, she loves her “sisters” at the center. She says, “They are now my family.”