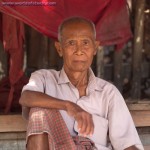 Leprosy had taken everything from Lee. Health, home, and family all disappeared during his struggle for survival, and he was left with nothing. The disease transformed him into a refugee, an outcast in his own nation. But Lee knew there was hope. At Rehab Center of Thailand he found healing and wholeness, not only for his body, but also for his weary soul. Lee’s hands became capable and skilled once again. After much therapy, he was able to begin crafting hand-painted greeting cards. Staff saw an immediate change in Lee. Confidence and joy began to take shape and he felt at home in his new community. Not long after, Lee was married and now has a family of his own. Together, they live and work at Rehab Center of Thailand, knowing they have dignity and worth beyond measure.