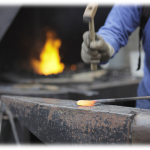 Arturo used to work with his dad as an electrician. But that was back when there was work. For a time he also worked at a localtextile factory by borrowing his older brother’s ID since he was only seventeen at the time and too young. But Arturo’s real dream was to have his own business. Although he had never considered blacksmithing, when Arturo was given an opportunity to learn the trade at the Academy he caught on quickly and grew to love it. There, Arturo has learned what it is to work with a team, to do his work well, and to do it responsibly. He has even begun to teach others the things he has been learning. By doing so, others can learn to work and provide for their families, too. At twenty, Arturo has much responsibility with a wife and a two-month old daughter at home. Thanks to the Academy, he is now able to provide for them!