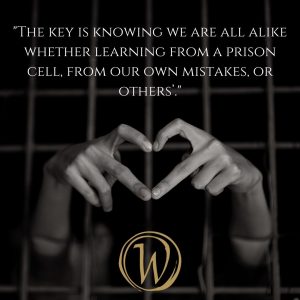 ﻿Today I wept…again…as I signed a receipt from an inmate of prison with a history of abusing others. He sends us sacrificial gifts in his journey of recovery. These are not out of “penance” for his brokenness but out of joy that places exist for healing of those like him and for those he harmed long ago. No one was there for him as a little boy to hear his silent scream.

My mommy heart always makes me stop when I see his gifts and take a deep breath. Often little boys and girls who grow up to wound others were wounded by others themselves. I stop and pray for the tiny lives out there needing a loving, listening home. I beg God to place them in my way or another’s to show a gentle touch, a listening ear, a whisper of joy and worth in who they are. I’m so humbled by his precious gifts. Our pain and our brokenness break God’s heart as He loves unconditionally.

Jet-lagged, I woke early this morning to sit in the darkness of my living room and pray for the day. Take these words as a love letter. Mother Teresa said, “I’m a tiny pencil in the hand of a writing God sending a love letter to the world.” I’m no Mother Teresa, but my hope is this: Whether you read this from a cozy chair with your morning cup of tea; from your kitchen overflowing with dirty dishes and a herd of munchkins at your feet; from a lofty, ivory tower imparting knowledge to the world; or just from a bunk bed in a cell staring at four walls, I pray you come to understand that our hidden worries are known, and we’re loved by our Creator, worthy even in our messes and broken places, or from our comfy homes or offices.

The ancient truth which changes individuals and cultures is that we are stronger, more loving, and better able to navigate sorrow or joy when we intentionally choose to be a circle of protection and community of safety to each other. The key is knowing we are all alike whether learning from a prison cell, from our own mistakes, or others’. Humility binds us together. I welcome the gift of the penitent. Help us God to all be penitent, intentional, and in humility, consider others better than ourselves. This lesson comes from “the least of these,” from four walls of a prison cell, and a broken little boy, now a man, who shares sacrificially to heal others in ways he never experienced. God help us learn from him!

As a little girl, I saw what happens in war. My playmate and many others were attacked. War is carnage. Remember the fall of Berlin in 1945? In Berlin alone, 100,000 women and girls were raped, that number increasing to two million across German territory. The plight of Afghani women is so horrific I can’t write about it in detail or without weeping. It’s vile and x-rated. I’ve testified in courts of these women’s plight at the hands of extremist Islam during peace times. War’s chaos only makes it worse.

IMAGINE… as a child you are married to someone you’ve never met, and you then live with your mother-in-law who’s abusive. You run away. The military finds you. Your husband holds you down as they cut off your nose, forever marking you with the “scarlet letter” to tell the world that you were disobedient. The front cover of Time Magazine featured this young woman years ago. True story.

IMAGINE… you have a baby girl. You shave her head bald, dress her as a boy and then veil yourself from head to foot so you can leave your house to buy a loaf of bread. You must not go in public without a male… even if the “male” is a newborn. You certainly don’t want anyone to know you have a girl. You’re forced to decide whether or not to raise your daughter dressed as a boy and hope no one discovers otherwise. We’ve told one woman with a child to hide her infant. True story.

IMAGINE… you have a daughter. I have one daughter and four granddaughters. You are told to mark your house with an “X” if you have a daughter age 12 or older. The military comes and takes her to be a bride to a soldier. If you don’t comply and they find her, they will execute your whole family. True story.

WAR sent $2,000 by faith for 20 displaced families. This covers a basic kitchen kit ($100 each) of plates, cookware, glasses, and a tablecloth. Culturally, families enjoy meals sitting on the ground on a plastic tablecloth.

$150 will feed a family of five for a month at a survival level, providing some flour/rice, protein such as beans, cooking oil, and local spices. If possible, it will provide fruit and vegetables, too.

We can’t feed or rescue everyone, but we can do something. Some of you have given to this fund already, and it is on the way to feeding terrified families. If you wish to send $150 for a month of food or $100 for a basic kitchen kit, you can do this. I sent 20 kits immediately even though we did not have that much money in the fund. I know the WAR World; it will lift up mommies and daddies who need to feed their little ones. We will start small in what we send and do it through nationals on the ground who shop locally AND help restart their own economy. We will do it quietly, carefully, and further assist once the dust settles. For now, this is where we start.

The Taliban took Afghanistan in one week, Kabul in a weekend. People fled to large cities filling open spaces and parks. In villages, the Taliban often kills every able-bodied man and kidnaps all unwed women from age 12 and up to serve as wartime brides to soldiers. In cities, families must put an X on the door if they have girls over 12 years old. If found hiding a girl, death is instant. People have fled with nothing more than the clothes on their backs and are in need of basic food and shelter.

You know I grew up as an American among Muslims, studied Islam in college (intended to be a professor of world religions), and served for years in Muslim countries with my husband. Why do I share this? I want you to pray specifically for the hearts of Afghans. Those using “god” to do evil are not the enemy. They are captives of the enemy. Can we pray for them?

An ancient Islamic tradition says God has 100 names, and man only knows 99 of them. The Camel is the only one who knows the 100th…and that is why he looks so haughty! Pray that they will come to see the 100th name as Jesus, The Prophet Esa…our Prophet, High Priest, and King! Pray their eyes will be turned to true freedom in this Prophet they already revere but do not know.

WAR, Int’l has opened a WAR CHEST RELIEF FUND for Afghan women and girls. We will distribute funds as it is safe to do so. If it is the call of your heart, please consider donating so that these mommies may be able to feed their babies.